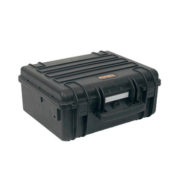 At this year’s SKUSA

Supernationals, I was fortunate enough to demo the new PitKit Lite for the week. I’ve always been a fan of Beta tools, as most experienced kart racers are. After all, they’re Italian, high-quality and very cool looking. But I’ve always been from the “it’s not the tool, it’s the mechanic”, school of thought. So my toolbox is filled with a hodgepodge of Craftsman, Companion and a wide variety of other assorted brands of tools, yes, even including the dreaded Harbor Freight variety. But after a week of using the Beta wrenches and t-handles, I’ve found myself in upgrade mode. 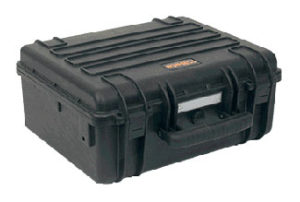 The PitKit Lite starts with a very heavy-duty, rugged, hard-shell Beta case with a manual pressure release valve. This case is very similar to something you might find from Pelican. I’ve had two “similar” boxes since I started working around the country with Rolison Performance Group as a tuner/mechanic. The first, a Harbor Freight version, almost made it through one trip. Actually it almost made it through one plane flight. It came out of the luggage carousel on its’ maiden voyage with tools hanging out the side and my tools had to make the return flight in my suitcase. The second was a Husky version and it fared much better until it came out of the luggage carousel with no handle. It still works, but the handle is now held on by an ingenious structure of zip ties. The Beta box is far sturdier than either of my previous cases. 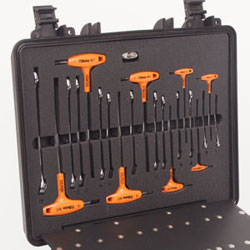 The PitKit Lite comes preloaded with a full set of Beta metric wrenches and even includes two 17mm, two 13mm and two 10mm, which is necessary when working on karts. In addition it includes the iconic Beta t-handle allen wrenches with the orange high-torque handles. Nearly every reputable kart tuner in the paddock at a major event will have these exact t-handles in their box.  All of these are fitted into a section of laser-cut, high density foam in the top of the case.

In addition there two sections of storage with elastic to hold whatever other tools you need, screwdrivers, pliers, ratchets, sockets and so forth. Finally, there is ample open storage space in the bottom for hammers and larger items. The bottom storage section is customisable with included dividers.

At the end of the weekend, I really didn’t want to give the PitKit Lite back (it turns out that working with nice tools is pretty awesome), so I bought it. I’ve transferred all of my cheesy tools into it and still have room to spare. Now I’m in the process of replacing my cheap tools with high-quality tools. Thanks to PitKit, I’ve become a tool snob. If you’re looking to upgrade your tool set or if you’ve realized that having all your tools in one easy to transport case would be sweet, then I highly recommend the PitKit Lite.

If you’re interested in the PitKit Lite or Beta tools, visit their site here.